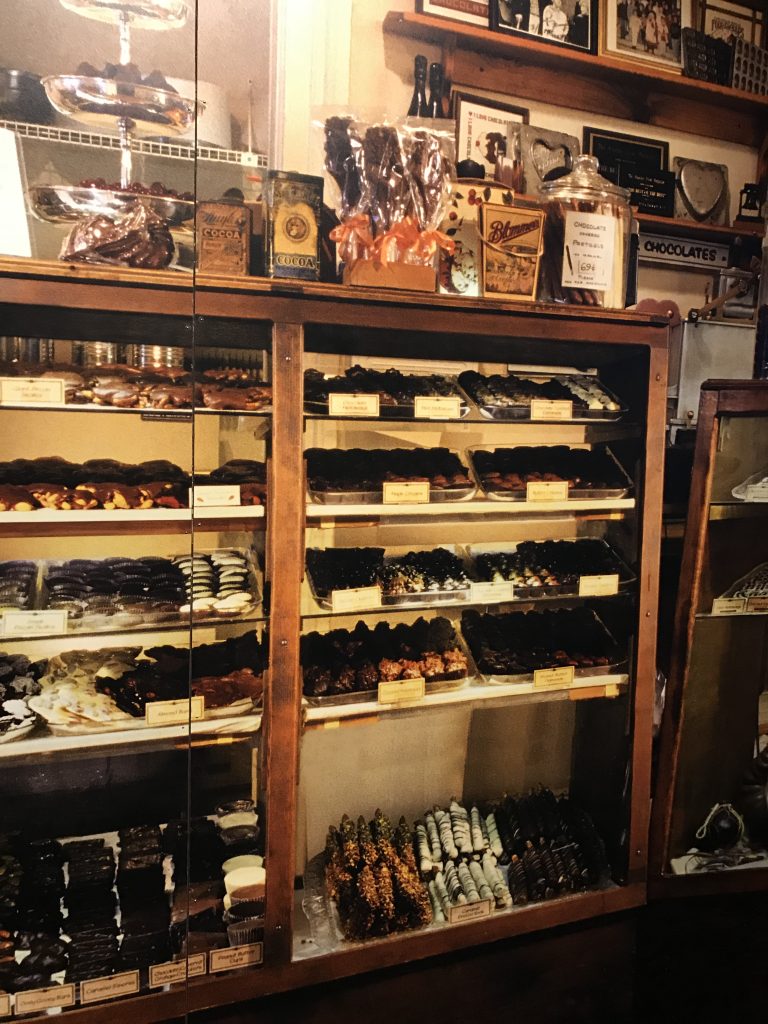 A stunning number of exhibits about chocolate, mostly on the East Coast, captured our attention in the last six months. Mark and I had the opportunity to visit three very different exhibits, what I call #3, 4 & 5. I reviewed the exhibit (#1) at Detroit Institute of Arts (DIA), where I was honored to present. We visited the Morris-Jumel Mansion (#2) which I wrote about in an earlier post.

It has been especially helpful to see these displays and objects as we gear up to mount a Jews on the Chocolate Trail exhibit at the Bernard Museum in New York City. By the way the list of chocolate museums around the world has been updated in the second edition of On the Chocolate Trail to be released in the fall.

3. Only one of these exhibits remains accessible at the only permanent chocolate museum in NYC, Choco-Story, at the Jacques Torres shop in NYC. It opened in March 2017 in Soho and is part of a chain of chocolate museums set up by Eddy Van Belle in Belgium, France and Mexico. In addition to beautiful porcelain chocolate cups and pots, it includes some unusual items such as this chocolate cutter. The museum also helps visitors understand about chocolate components and chocolate making through exhibit information as well as through hands-on demonstrations. 4. Chicago’s Field Museum created “Chocolate” in 2002 and the show has been traveling since then. We had seen it in San Diego and Philadelphia and most recently this spring at the Boston Science Museum. It explores the rich natural and cultural history of chocolate from its origin in the rainforest to its popularity as a consumed food. Design reflects advancement through cultures and time from chocolate shop back to its early Mayan/Aztec setting. The show travels soon to North Dakota and to Michigan. 5. Unlike the exhibits portraying chocolate’s development and related material culture, the SculptureCenter in Long Island City, Queens, highlighted art generated by a project of Renzo Martens from 2014. Using a 3D printer he digitized scans of clay self-portraits by Congo chocolate plantation workers, members of the Congolese Plantation Workers Art League. The show brought the contemporary art of a cocoa grower collective in Africa to NYC for the first time and elevated the status of the poor cocoa growers into the art world. As the exhibit brochure states: “ … plantation workers are grossly underpaid for their contribution to the global industry.” They live without basic amenities. Using luxury chocolate as a medium for art enables them to profit from the sales.