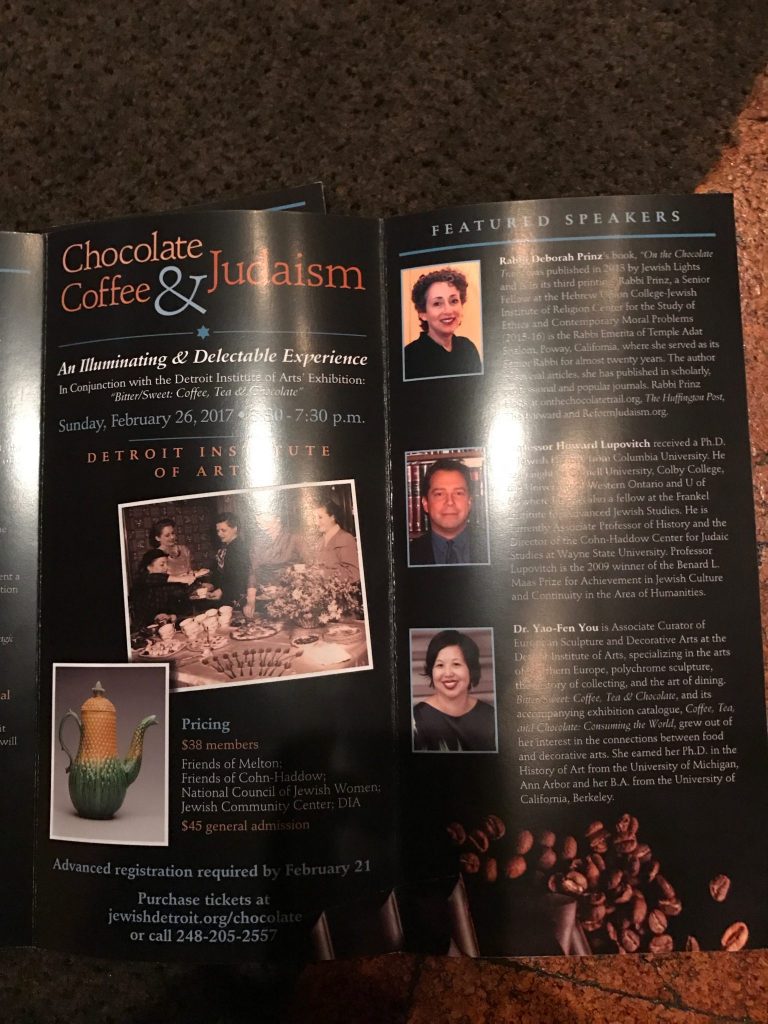 Chocolate, Coffee, Tea and Me

Thank you to the Jewish Federation of Metropolitan Detroit for the invitation to speak at their event Chocolate, Coffee, and Judaism created in conjunction with the Detroit Institute of Arts exhibit “Bitter|Sweet: Coffee, Tea & Chocolate.” Not only did I have the opportunity to meet a curious audience, I also presented with Professor Howard Lupovitch from Wayne State University and the exhibit’s curator, Dr. Yao-Fen You. Federation’s Judy Loebl was a great host. Since we are in the midst of a conversation about (the possibility of, perhaps,) a local New York area museum exhibit about Jews and chocolate, I was especially excited to see the chocolate appurtenances in person. Some I had seen in books, such as this porcelain of a woman drinking chocolate for breakfast. I love this piece since it demonstrates the use of the relatively new European technology of porcelain manufacture along with the relatively new appetite for breakfast chocolate drinking. The portrait also furthers a conversation about the colonial extract aspects of chocolate which continues to concern us in our chocolate consumption even today. As the first hot, caffeinated drink to tempt Europe prior to coffee and tea, chocolate created a market for serving objects. These included chocolate pots and several styles of cups, such as these. I also made special note of the design of the show, how the objects were displayed, the questions posed to viewers (such as which country sells the most coffee beans), the audio of Bach’s known Coffee Cantata, and the film clip of chocolate making from the Hampton Court Palace in England. The visual and the auditory were topped off by chocolate aromas at the gallery exit, where museum staff poured tastes of spicy sipping chocolates.