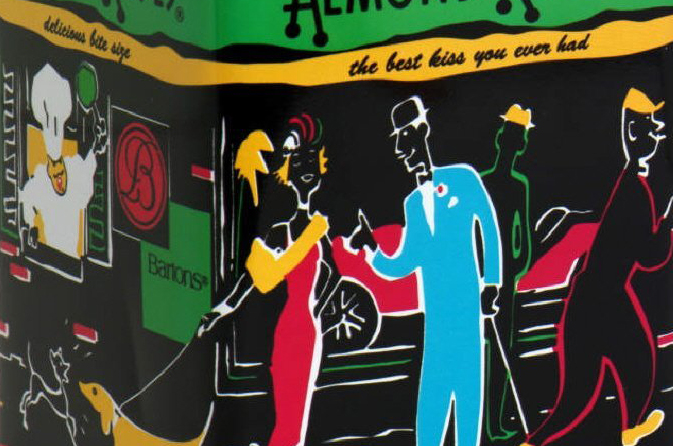 Bartons Chocolate Pops. Bartons Almond Kisses. Do you long for these and other iconic Passover favorites made by Bartons Chocolate? They exist because of the March 12, 1938 Nazi accession of Austria (Anschluss) when Stephen Klein fled Vienna for his life. A Nazi competitor had seized Klein’s chocolate company. He hurriedly left his two children and pregnant wife behind, spent five months in Belgium, ultimately able to reach the US. Within months he brought his young family to New York, later to be joined by his five brothers and two sisters. From the small New York apartment that he shared with ten family members, he concocted chocolates catering to the varied tastes of the local ethnic neighborhoods. Relatives sold the sweets from pushcarts. Commenting on his product, Klein knew which chocolates to blend and how to control taste. As he put it, “All the pieces should look good—no chazerei  [junk]….” As he molded his successful American company, Bartons Bonbonniere, it in turn aided other World War II refugees. Bartons Brooklyn’s headquarters housed an office of immigration for assisting with the technical details of bringing over displaced Jews. His company hired many of those approximately fifteen hundred individuals.. While the payroll included Orthodox Jews, it was a very pluralistic, multi-ethnic work line. No strikes disrupted the flow of chocolate and there were no complaints about closing on Saturdays. Employees were allowed to eat as much chocolate as they wanted. Klein furthered the work of the American Orthodox relief agency, Vaad Hatzala, originally established to rescue rabbis and yeshivah students. It eventually expanded to assist all Jews during World War II. The Vaad sent packages of religious articles, food, clothing, household goods, and Bartons chocolate through Tangier to Nazi-occupied countries. Klein educated his chocolate adoring public by packing games and Jewish holiday stories into his chocolate boxes. Bartons also initiated kosher-for-Passover lines which included items like Matzah Balls, chocolate covered coconut or marzipan. Even the seasonal Santa Clauses and Easter eggs were kosher. Though the Klein family sold this charitable immigrant start-up in 1978, Passover Kisses and other Kosher for Passover Bartons products can adorn your menu again this year.