Updated! On the Chocolate Trail: A Delicious Adventure Connecting Jews, Religions, History, Travel, Rituals and Recipes to the Magic of Cacao (Second Edition 2017)

Take a delectable journey through the religious history of chocolate—a real treat!

The book forms the basis for the museum exhibit, “Semite Sweet: On Jews and Chocolate,” now available to travel to your community from the Bernard Museum, Temple Emanu-El, NYC.

With mouth-watering recipes, a glossary of chocolaty terms, tips for buying luscious, ethically produced chocolate, a list of sweet chocolate museums around the world and more, this book unwraps tasty tidbits such as: •“Gods in My Chocolate,” twenty-first-century controversies about deities formed from chocolate: Blasphemy or art?

•What did Alexander Hamilton Drink?

•Secret Santas hidden in my Maccabees

•Chocolate Babkathon: The Best in NYC

The bishop of Chiapas, Mexico, was poisoned because he prohibited local women from drinking chocolate during Mass.

Although Quakers do not observe Easter, it was a Quaker-owned chocolate company—Fry’s—that claimed to have created the first chocolate Easter egg in the United Kingdom

A born-again Christian businessman in the Midwest marketed his caramel chocolate bar as a “Noshie,” after the Yiddish word for “snack.”

Chocolate Chanukah gelt may have developed from St. Nicholas customs.

The Mayan “Book of Counsel” taught that gods created humans from chocolate and maize.

On the Chocolate Trail: A Delicious Adventure Connecting Jews, Religions, History, Travel, Rituals and Recipes to the Magic of Cacao is in its 2nd Edition! Thank you to everyone who has bought a copy or more for gifts, teachers, book clubs, adult study and other.

To purchase your copy or additional copies of On the Chocolate Trail: A Delicious Adventure Connecting Jews, Religions, History, Travel, Rituals and Recipes to the Magic of Cacao.

Would your group enjoy a sumptuous adventure through the history of one of the world’s favorite delicacies—chocolate? This exciting book shows the fascinating intersections of Jews, Quakers and other Protestants, pre-Columbians and Catholics along the chocolate trail and explores the lasting rituals involving chocolate that the world’s faith traditions have practiced. Includes seventeen unique and delicious recipes that can be made and shared with your group! Book club discussion materials available for download. 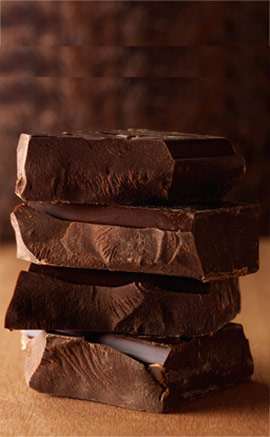 Press Packet On the Chocolate Trail

Join Debbie on the chocolate trail for a gastronomic adventure. The next time you pick up a piece of chocolate, consider that you are partaking in an age-old passion for religion and food. Explore the surprising chocolate narratives and rituals of Pre-Columbians, Jews, Catholics, Protestants and Quakers. On the Chocolate Trail uniquely melds a popularity of chocolate with a fascination about religions. Those interested in the connectedness among peoples will crave this unique approach. Delight your mind and your taste buds as this book unscrambles the mysteries of religions and chocolate along a trail of economic development spanning cultures, countries, centuries, continents, and convictions.

Deborah Prinz’s book, On the Chocolate Trail: A Delicious Adventure Connecting Jews, Religions, History, Travel, Rituals and Recipes to the Magic of Cacao (Second Edition, 2017) is being used in adult study, classroom settings, book clubs and chocolate tastings. She also co-curated the “Semi[te] Sweet: On Jews and Chocolate” exhibit for the Bernard Museum of Temple Emanu-el, New York City, now available to travel to your community. On the Chocolate Trail provided the foundation for the show featuring historical and contemporary art, artifacts and memorabilia portraying stories of Jews and chocolate.

Rabbi Prinz lectures about chocolate and religion around the world. The book is being used in adult study, classroom settings, book clubs and chocolate tastings. Prinz blogs at onthechocolatetrail.org, the Huffington Post, the Forward and ReformJudaism.org. She was awarded a Starkoff Fellowship and a Director’s Fellowship from the American Jewish Archives as well as a Gilder Lehrman Fellowship from the Rockefeller Library to pursue this research. This project stirs age-old passions for chocolate and religion using information gathered from travel in several countries, including Belgium, Canada, England, France, Israel, Italy, Mexico, Spain, Switzerland and the United States. It spans several cultures, countries, centuries, and convictions, exploring how faith traditions share consumption, ritual and business interests in chocolate.

Rabbi Prinz has held a number of leadership positions in the national and regional Reform movement, having recently served the Central Conference of American Rabbis (CCAR) as Director of Program and Member Services and the Director of the Joint Commission on Rabbinic Mentoring. She currently mentors through the Mayerson program at the Hebrew Union College-Jewish Institute of Religion (HUC-JIR). She was also a Senior Fellow at HUC-JIR’s Center for the Study of Ethics and Contemporary Moral Problems (2015-2016). She has consulted for HUC-JIR, the Union for Reform Judaism (URJ), and other organizations. She was honored to conduct the worship services at regional and national biennials of the URJ. Elected by her colleagues, Rabbi Prinz held each office of the Board of the Pacific Association of Reform Rabbis and assumed its presidency in 2005.

The Rabbi Emerita of Temple Adat Shalom, San Diego County, California, she held the position of Senior Rabbi for almost twenty years. Prior to that she was, for seven years, the Rabbi of a synagogue in Bergen County, New Jersey, and also the Assistant Rabbi of Central Synagogue in Manhattan. She has delivered many talks to community organizations.

The author of several articles, she has published in scholarly, professional and popular journals such as the CCAR Journal, the Hebrew Union College Annual, Reform Judaism Magazine, and the CCAR Yearbook. Articles and blogs about and interviews of Rabbi Prinz have appeared in the national and local media. “Rabbi Follows Her Gut to Discover Historical Link Between Jews and Chocolate” in Times of Israel, by Danielle Ziri, June 13, 2018.

“All Your Questions About Jews and Chocolate Answered” in the Forward by Shira Feder, May, 2018.

“Bring on the Chocolate” by Judy Bart Kancigor, January, 2017.

“A Traveling Chocoholic” by Rebecca Bratburd in The Wall Street Journal July 16, 2013.

JTA-distributed articles “Hanukkah gelt gets a makeover as chocolatiers raise the bar” Haaretz, Nov. 16, 2014, “A call to raise the (chocolate) bar for Hanukkah gelt” The Times of Israel, December 11 2014, and elsewhere.

“A delectable journey” by Benji Rosen in The Jerusalem Post Magazine [subscription] January 30, 2014.

“Walk Down the Jewish Chocolate Trail” by Leah Koenig at The Jewish Daily Forward January 25, 2013

“Gifts for Literarily Everyone: Holiday Book Guide” by Jonathan Kirsch in the Jewish Journal November 20, 2012

“The Long-Lived Jewish Relationship With Chocolate” by Vered Guttman in Haaretz Thursday, August 2, 2012

Praise for “On the Chocolate Trail”

“A joy for history and chocolate buffs…. Traces the exciting and curious aspects of the evolution of chocolate. The reader is rewarded with fascinating nuggets of chocolate lore, as well as several yummy chocolate recipes.”

“Bravo! … Takes us on a roller coaster roll through the history of chocolate, from the beginning when it was only used as a drink to the present day…. A great read.”

“Yes, separate milk from meat. And wool from linen. But do not separate Jews from chocolate. They shall be yoked together for all time. And now we have the definitive book on the topic, an eloquent and astutely researched history.”

—A.J. Jacobs, editor-at-large, Esquire Magazine; author of The New York Times bestseller, The Year of Living Biblically: One Man’s Humble Quest to Follow the Bible as Literally as Possible, and other books

“This engaging journey into the extraordinary past of a much-loved product is packed with fascinating stories and thrilling bits of information.”

—Claudia Roden, food writer and author of almost twenty classic works on Middle Eastern and Mediterranean cookery; most recently, the award-winning The Book of Jewish Food

“Calling all chocoholics…. I devoured this book. Readers beware! Stash fine chocolate in your pack before setting off on this delicious journey across time and space.”

“A treat! Part history, part travelogue, part cookbook, [it] … will tantalize all readers and delight chocoholic ones.”

“A knowledgeable, surprising and, of course, delicious book. Chocolate lovers (and that includes just about everyone) and Jewish historians alike will be delighted.”

“A fascinating ramble through the history of chocolate and the roles—sometimes central, sometimes peripheral—that Jews have played in bringing it from the forests of Africa and Spanish America to your table. The recipes are a tasty bonus.”

—David M. Gitlitz and Linda Kay Davidson, authors, A Drizzle of Honey: The Lives and Recipes of Spain’s Secret Jews

“A delightful, fascinating read full of history, religion, ethics, anecdotes and recipes that will make you hungry.”

Resources for Further Learning for On the Chocolate Trail:

A Socially Responsible Haggadah for a Chocolate Seder

Map of the Sephardic Diaspora And Chocolate

(all chapter and page numbers refer to On the Chocolate Trail)

A search of the Responsa Project of Bar Ilan University for these terms yielded a number of items, as follows, used by permission (organized thematically):