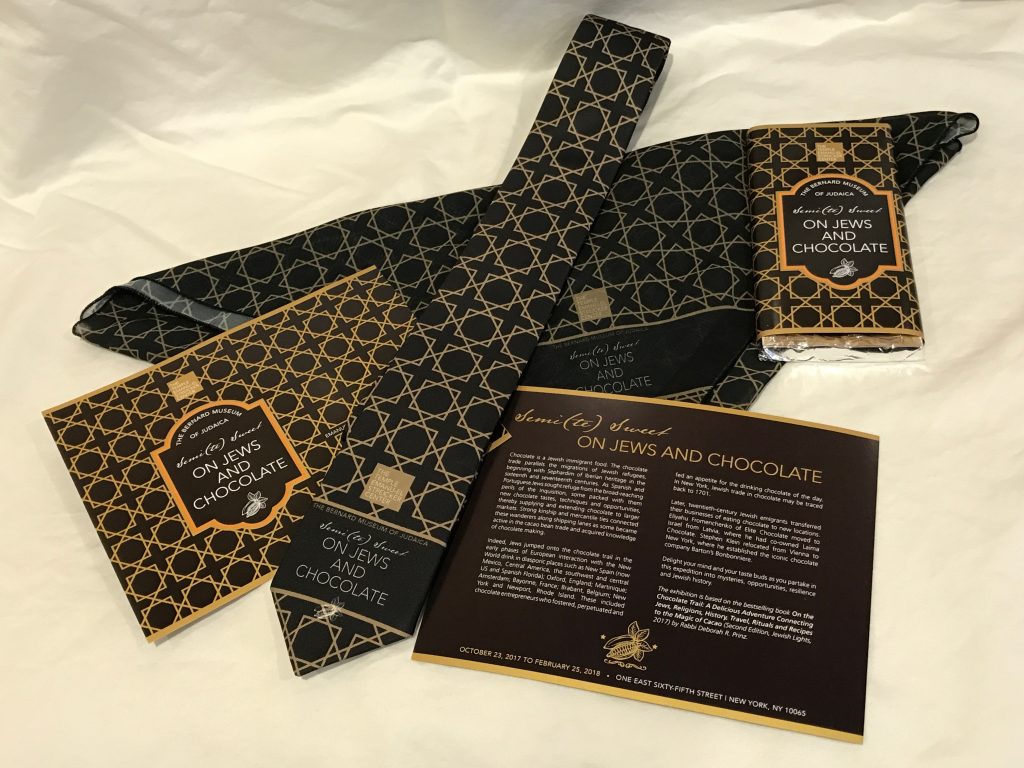 Excerpted from my remarks at Opening Night at Temple Emanu-El, NYC, October 20, 2017:

Some people have books optioned for movies. I am so delighted that my book, On the Chocolate Trail (2nd Edition, 2017) has become a museum exhibit…

Thank you, Warren Klein, for your professionalism, creativity and collegiality in creating Semite Sweet, which displays some objects for the first time ever, much less together.

I appreciate that Gady Levy reached out to me with his vision about the uniqueness of an exhibit about Jews and chocolate.

I am grateful to Rabbi Davidson, the clergy team, and congregational leadership for the opportunity to bring the Jewish chocolate trail to this bimah.

… As you meander your own sweet trail through the exhibit I invite you to consider a few themes:

1. Chocolate provided business and trade opportunities to refugees in their relocations. Chocolate is a migrant food. Jews, initially Sephardim, later Ashkenazim, were sustained by it.

2. Second, while some historians of Jewish life identify the lachrymose tragedies of our past, these are stories of resilience and resourcefulness.

3. Third, chocolate drinking preceded eating chocolate which develops in the 19th century after the Industrial revolution.

I learned through research for the book about the Sephardi immigrants to the British Colonies in North America who were in the chocolate business:  Aaron Lopez in Newport, RI and the Gomez family in NYC. These were people who returned to their Jewish identities by escaping Spain and Portugal.

Aaron Lopez immigrated to Newport from Portugal prior to the Revolution. Vastly successful trader and merchant, Lopez supported Touro Synagogue. Documents in the exhibit show that he distributed tzedakah to indigent Jews in the form of balls of chocolate. We also see in his papers the first known record connecting Pesah to chocolate. In New York City, in the same period, five individuals in two generations of Gomez family traded, retailed, wholesaled and consumed chocolate. Patriarch Moses Luis Gomez escaped Spain as small child, possibly via Bayonne, France, ultimately to New York City. Gomez family members became founders of the Spanish Portuguese Synagogue, translators at the State Assembly,  and donors to the rebuilding of Trinity Church’s steeple after a fire. Rebecca Gomez was one of few women selling chocolate and the only woman manufacturing it at Anne and Nassau. Her husband Mordecay’s Estate Inventory lists a chocolate pot, chocolate cups and cacao beans imported from Surinam.

These two Sephardi families, connected through familial and mercantile ties, not only supported themselves through their chocolate businesses and consumption of chocolate, they were also very engaged with their Jewish and non-Jewish communities.