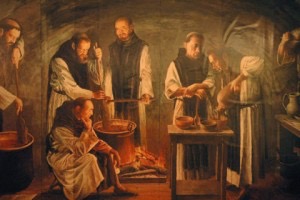 Fathers, Dominicans that is, helped bridge the New World’s chocolate to the Old World. In 1544 Padres tantalized the Spanish court with chocolate prepared and presented by a Kekchi Maya delegation of New World natives. Fatherly faith indeed aided in spreading chocolate to new regions of the world, to new religious contexts, and to new appreciation.

As Europeans slowly acquired a taste for it, celebratory chocolate enhanced many Christian settings. Church leaders depended on chocolate for physical, economic, and spiritual sustenance. Eventually the chocolate appetites of sixteenth-and seventeenth-century Christian religious enrobed many members of the Church in the Old World. For them, chocolate became an instrument of adulation, an offering for the greater glory of God. In Spain, monks made chocolate, drank it in secret, and hoarded their supplies and recipes. The Cistercians at the monastery at Poblet in Spain designated a special room for chocolate drinking. Early chocolate adopter Alphonse de Richelieu (b. 1585), cardinal of Paris, first tasted chocolate, when his protégé Cardinal Mazarin brought a personal chocolate maker with him from Italy. In 1634 Mexican Jesuits were shipping chocolate to their brothers in Rome by way of Seville. For his submission to a poetry contest honoring the seventh birthday of King Charles II, a Carmelite friar referred to chocolate as “that inspirational Ambrosia.” Jesuit Father Roberti treated himself to a drink of what he called the “Mexican nectar” at his morning meal. He also sought inspiration from a bowl of chocolate when writing.

Back in the New World chocolate provided good road food as the church extended its mission to California along the El Camino Real of twenty-one missions. When Franciscan Father Junípero Serra left Spain for his duties in the New World, he nestled chocolate in his personal belongings. Storms required his ship to make port at Puerto Rico and a local mission there provided sustenance in the form of chocolate. Serra reported: “For eighteen days we ate better than in any convent, all drinking chocolate every day.”

We honor these fathers, actually all fathers, whether religious or not, with chocolate.

This has been cross posted from the Huffington Post. Many fine chocolatiers today make delicacies called mendiants. These immortalize the mendicant (beggar) orders–Augustinians, Carmelites, Dominicans, and Franciscans–those that serve the poor and rely only on donations for support. Each nut and dried fruit in the mendiant symbolizes the color of the respective monastic robes: raisins for Dominicans, hazelnuts for Augustinians, dried figs for Franciscans, and almonds for Carmelites.

2.    In a large heatproof bowl set over a pan of simmering water, stir the chocolate until melted.

3.    Remove the chocolate from the heat.

4.    Drop tablespoonfuls of chocolate onto the prepared baking sheet, using the back of the spoon to flatten into disks.

5.    Place one of each of the four toppings onto each circle.

6.    Work a few medallions at a time; they will harden as they cool.

7.    Cool on the baking sheet until hardened.

8.    Store in a cool place in a covered container.